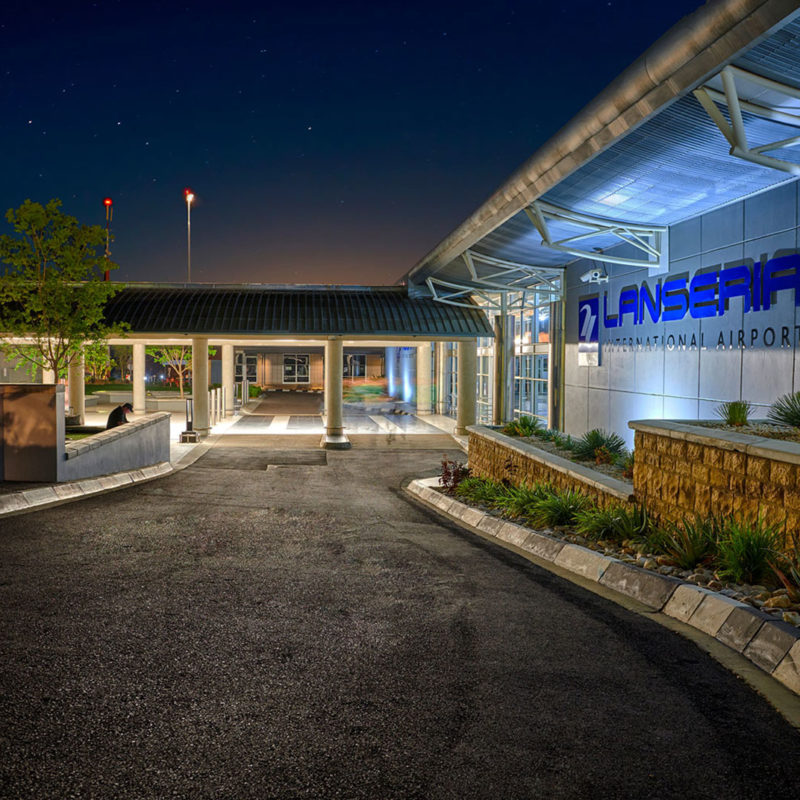 Home / Corporate / About / The Lanseria Journey

From humble beginnings as a grass strip airfield in 1974, to welcoming former President Nelson Mandela to Johannesburg after his release from prison, all the way to welcoming dignitaries and celebrities alike the airport has had its fair share of glory and continues in its path to greatness.

The airport continues to expand exponentially and we would like you to join our intriguing journey from the past to our future. 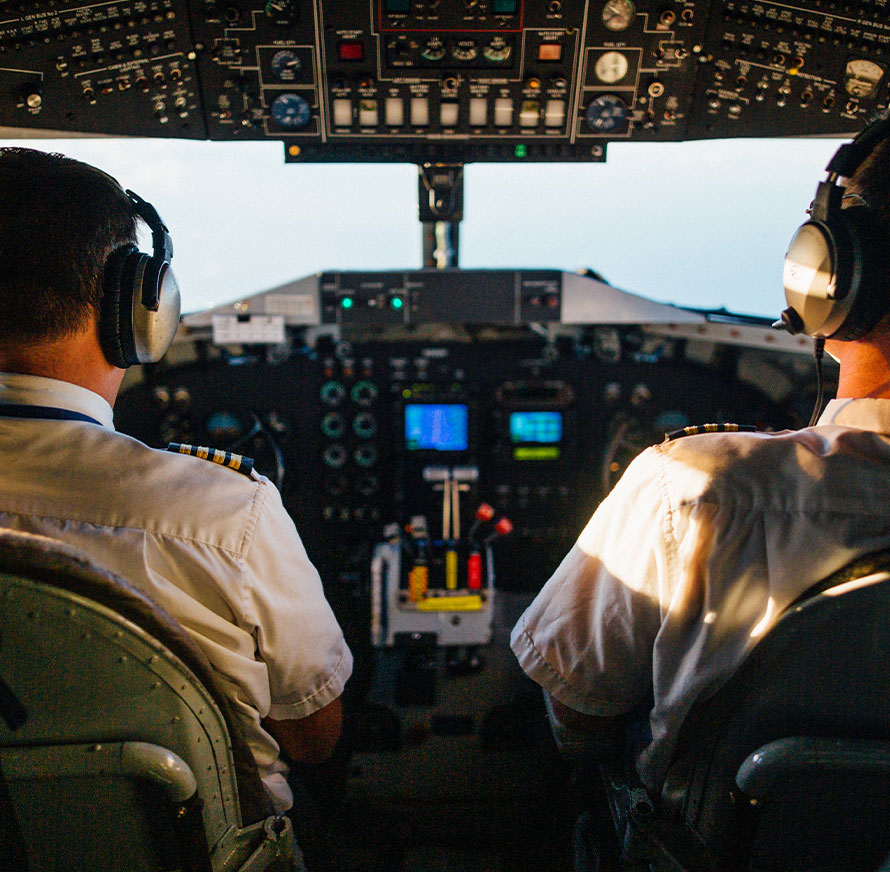 It was the vision of aviation enthusiasts that stirred up the creation of building another airport in Johannesburg in the early 70’s.
Today Lanseria is still the only other Internationally accredited airport in Gauteng.
In 1974 with a mere R2,7 million, construction began and today the airport has undergone several expansion projects to keep up with its impressive growth.
Commercial flights between Johannesburg Cape Town, and Durban operate daily on kulula.com, FlyMango and FlySafair.
Airport facilities include an upgraded passenger terminal building, restaurants, duty free shopping, lounge facilities, ample parking, easy flow pick up and drop off area and with improved road access getting to Lanseria International Airport is hassle (and toll) free.
Long- and short-term parking facilities have been extended to facilitate growth.
The onsite Emergency Services Department at Lanseria International is highly rated and among the best in Southern Africa. They have won the South African National Fire Fighters competition for 3 consecutive years and offer specialised aviation emergency services.
The excellent service provided 24/7, 365 days a year has ensured that Lanseria remains the favourite destination of most private internationally jet travellers. 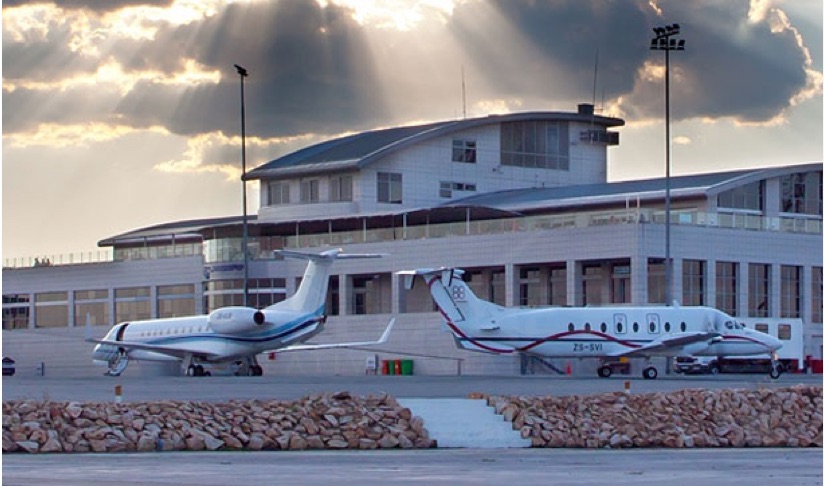 “To build the busiest airport in the country” was an idea sparked by two aviation enthusiasts (Fanie Haacke and Abe Sher) in the 70’s. In 1974 the dream became a reality and work began to build Johannesburg’s alternative international airport, with a mere investment of R2,7 million. The residents of the area were not too excited about the prospect of getting a noisy airport on the boarders of their peaceful farming land. They formed a committee and protested against the development, which regularly made front page news. However, the Minister of Planning, Mr JJ Loots confirmed the need for a new airport on 6 June 1972, and said the new facility would rival the only other large airport at the time, Jan smuts. Just two years later, the airport opened its doors to privately operated aircraft.
1971 Developed under the auspices of the then Krugersdorp and Roodepoort municipalities, Lanseria International Airport was awarded the international status.
1975 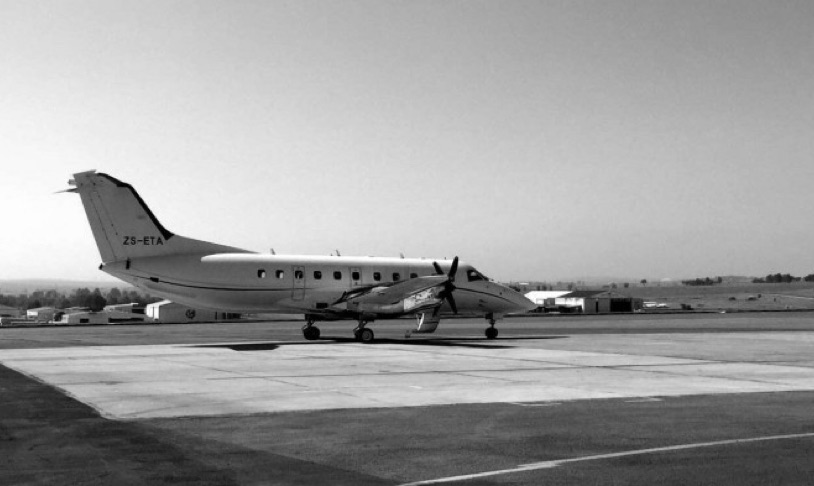 In 1975 Lanseria International Airport was chosen to host Air Africa International '75 - a major event on the international aerospace calendar and a milestone in South African aviation history. For the first time, South African buyers were afforded the opportunity of being able to select the latest international aircraft and electronic equipment. Air demonstrations that were originally produced for air shows in Farnborough and Paris, now delighted thousands of spectators at Lanseria.
1977

The success of the first air show spurred on another in 1977. More than R100 million rand worth of aircraft and equipment was on display at the Aviation Africa Show in October that year. A highlight of the air show was an exhibition by the South African Air Force, during which all types of aircraft in service would be put through their paces. The shows included the South African manufactured Mirage F-1. For the first time aircraft such as the Enstrom Shark and the revolutionary CSIR Autogyro helicopter was on display.
1977 In 1977, The Department of Transport published several changes in regulations governing private and charter aircraft. “Lanseria International Airport is to be the new terminal for all flights to and from South Africa by visiting aircraft registered in foreign countries and engaged in carrying passengers or cargo to South Africa for remuneration”, the Gazette stated. The move took much needed pressure off the busy Jan Smuts Airport, so that it could “focus on major passenger flights.” Lanseria International Airport continued to grow and over the years became the home base for several commercial airlines that coloured the South African skies. Today it’s home to our top airlines kulula.com, Mango and Fly Safair.
1990 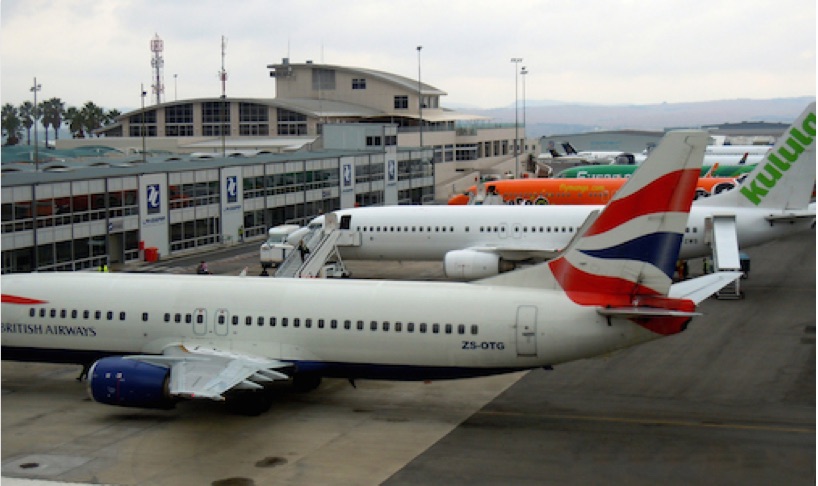 In 1990, Lanseria's co-owners, the Roodepoort and Krugersdorp Municipalities and the Transvaal Administrator, announced that the airport was to be sold. Tenders for the ownership and management of the airport were issued and the tender was awarded to a consortium of private investors in 1991.
1990 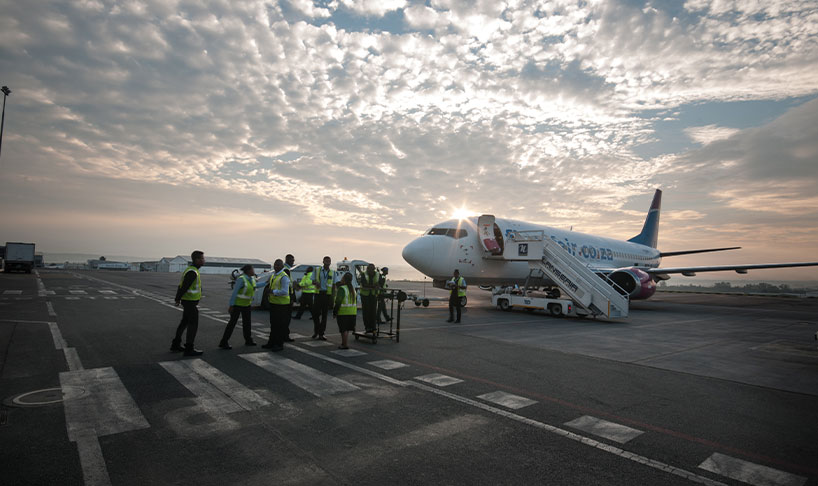 When former President, Nelson Mandela, was released from prison in May 1990, he was flown to Johannesburg and the first time he set foot on Gauteng soil after such a long time, was onto the tarmac at Lanseria International Airport. The airport continues to be the first choice to welcome international guests, presidents and superstars into our country.
1991 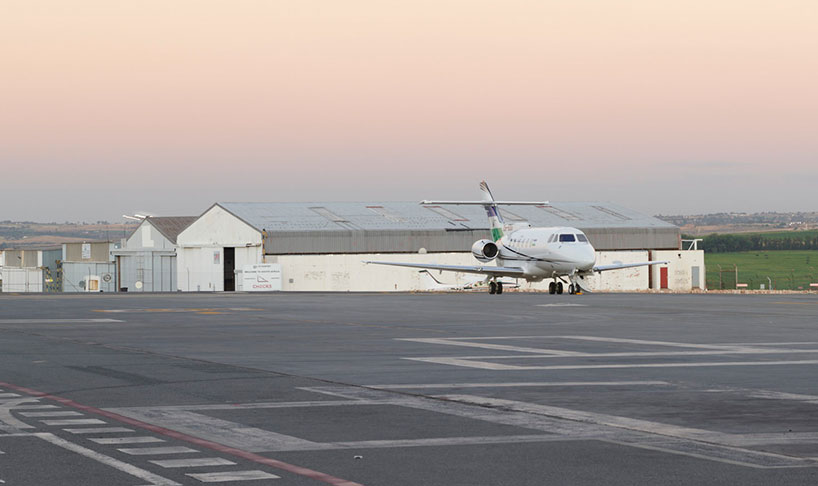 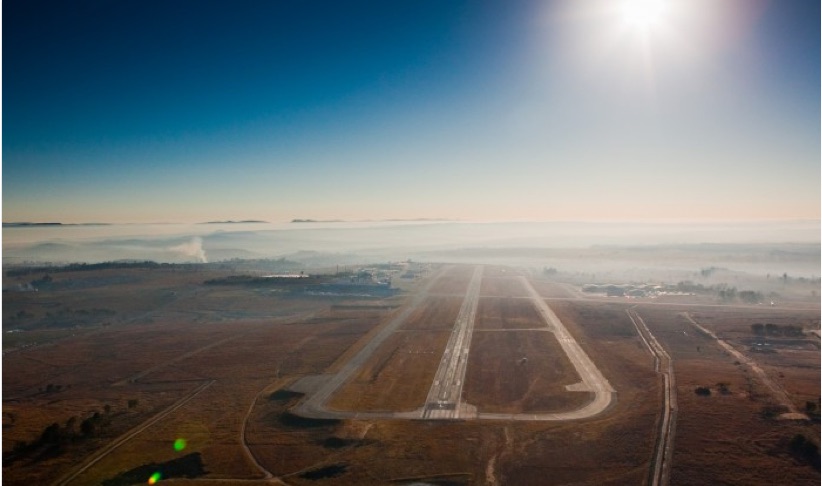 The Star newspaper reports (on 4 April, 1991) that the 300 ha airport will be turned into the “gateway to Africa” with a R50 million revamp. Later plans were put on hold, pending the outcome of a feasibility study. During 1991 Lanseria International Airport handled more than 108 000 aircraft movements and catered for more than 250 000 passengers. Many private and charter companies operated from Lanseria International Airport, using the airports 24-hour customs service and the many other facilities catering for pilots and passengers from all over the world.
1999 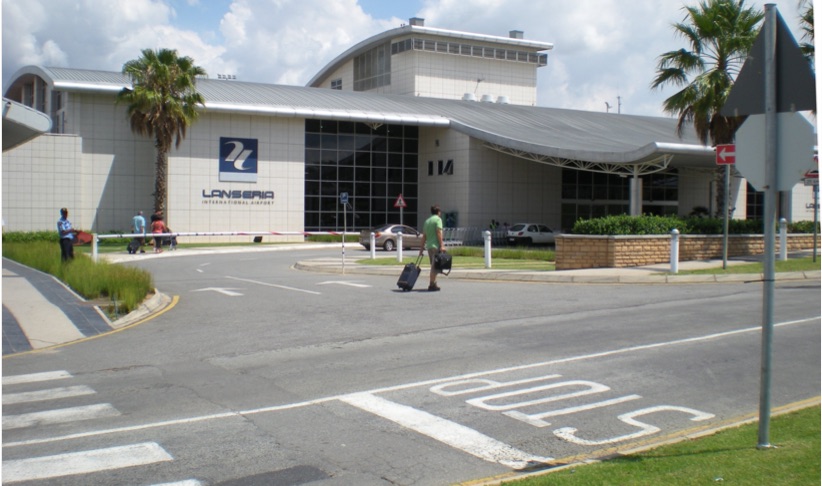 By 1999, the continued growth was evident in the number of airline operators, passengers and freight volume utilising Lanseria Airport. The 27-year old terminal building was no longer able to meet this demand and an expansion programme started. In 2002 a larger main terminal building was completed along with an upgrade of all runways and taxiways.
2001 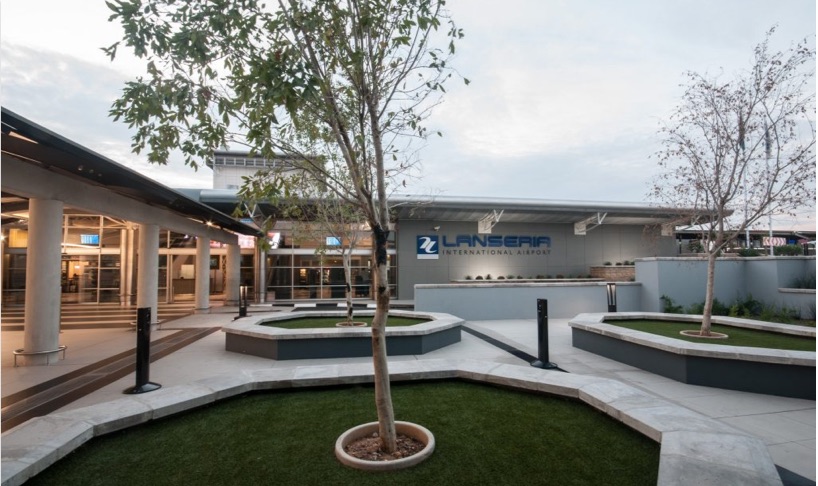 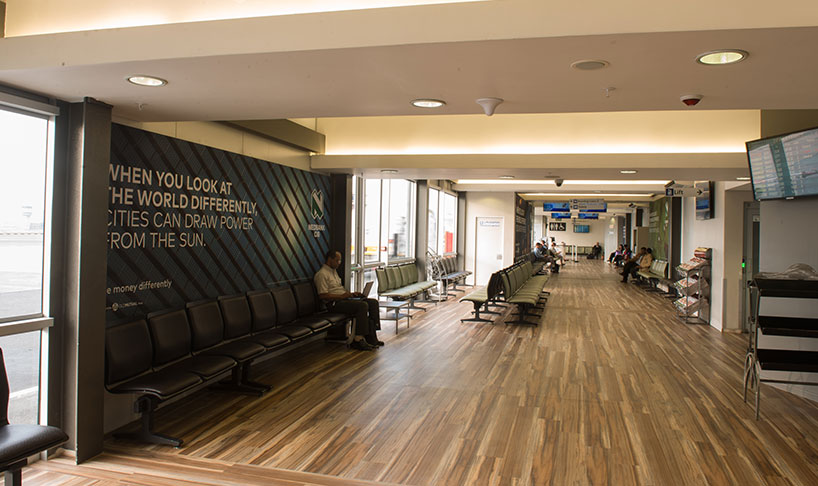 Refurbishment of the Main Terminal Building Upgrade of all runways, taxiways and technical area
2004 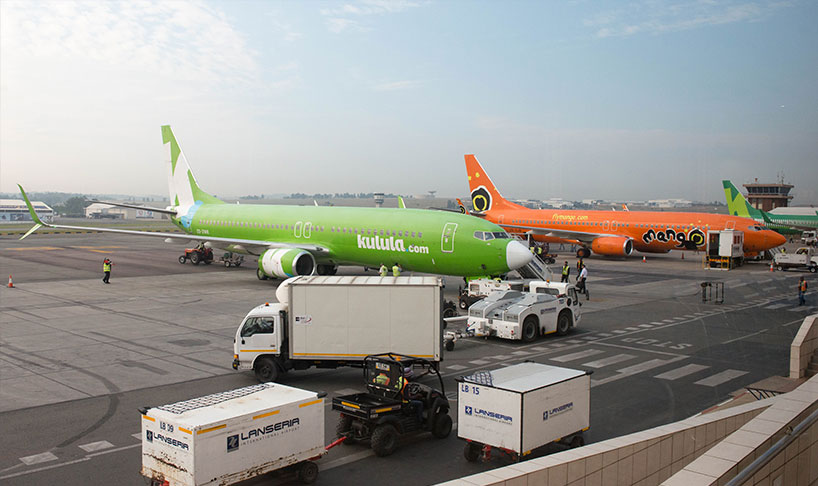 In 2004 both runways and taxiways were lengthened and widened to accommodate bigger aircraft like the Boeing 757-300 and Airbus 319 aircraft. Ms Wrenelle Stander, Director-General of Transport opened the airports extensions.
2012 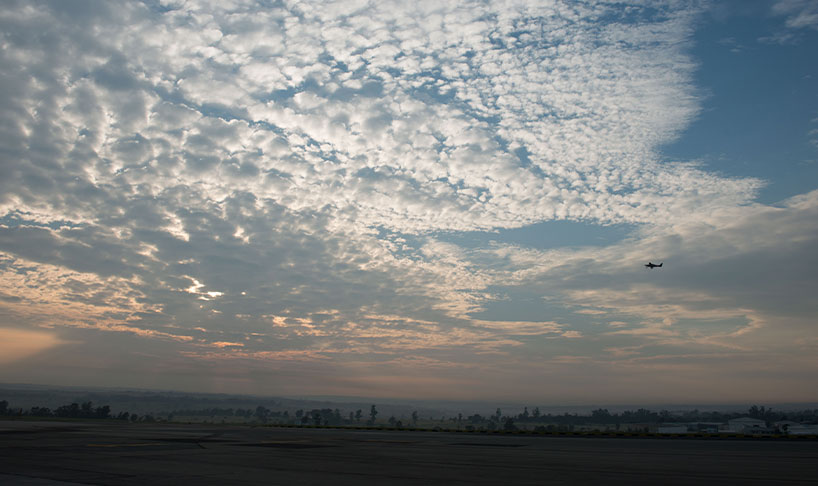 LIA is purchased by a group that consisted of PAIDF, Nozala and the Government Employee Pension Fund.
2016 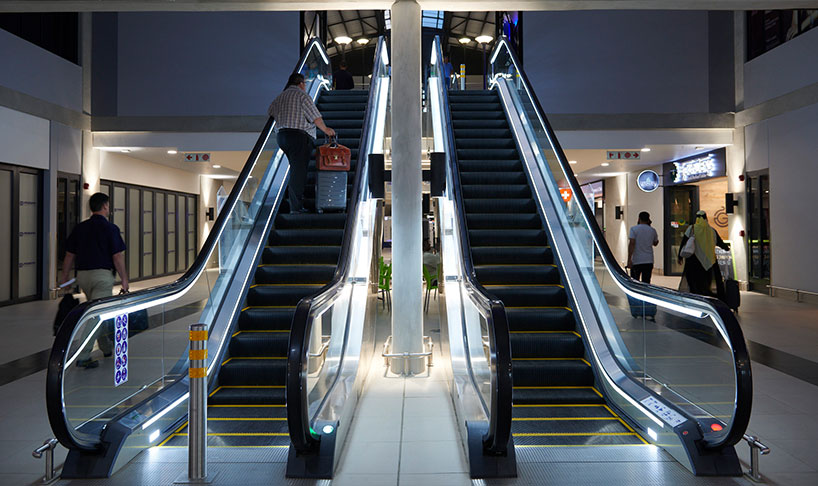 Extension of the international side of the terminal building
2013 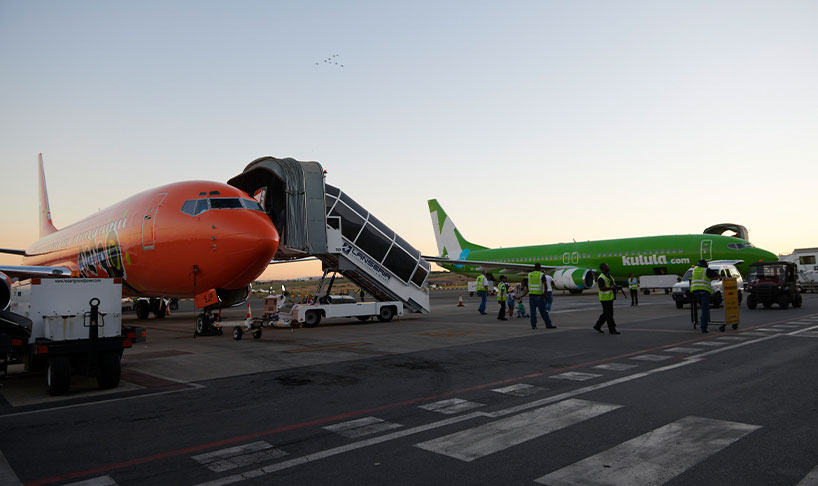 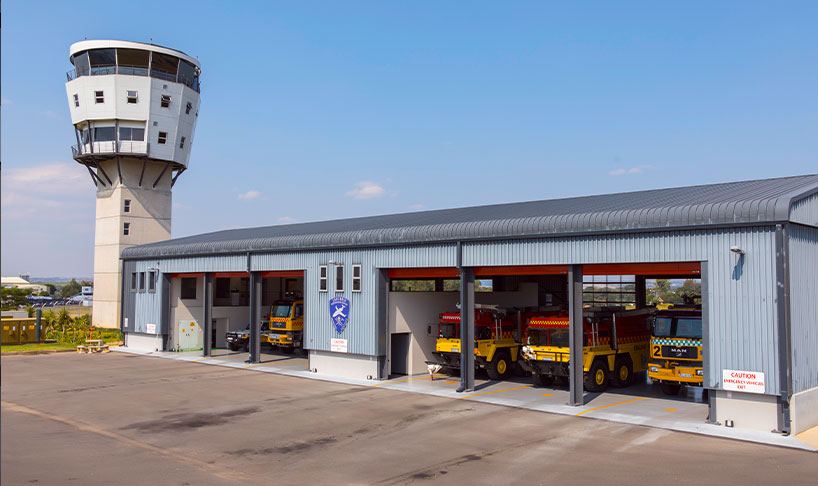 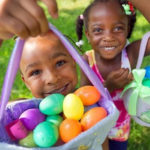 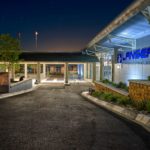